The UN secretary-general today urged religious leaders to “set an example for the lifestyle of billions” by establishing green places of worship, purchasing environmentally friendly goods and investing ethically in sustainable products.

Ban Ki-moon made the rallying cry in Windsor Castle, where members of faith-based and secular groups were attending a three-day climate change summit. He told delegates they could encourage governments to “act more boldly” in protecting people and the planet. 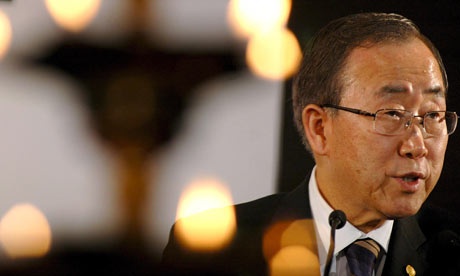 “We have technology and the science. Science has made it clear that climate change is happening and accelerating much, much faster than one realises,” he said.

“We have know-how and resources but the only vacuum is political will, that is all that is lacking. You can provoke, challenge and inspire political leaders.”

The audience sitting in the Waterloo Chamber had travelled from as far away as China, Ghana, India, Japan and Tanzania. Moon said many in the room had first-hand experience of the climate crisis.

“Those most likely to suffer first and worst … are the poor. The poor are also least responsible for the emissions currently in our atmosphere.”

“It is not a game of who waits for whom. Industrial countries should take the first step.” The major faith groups were involved with more than half of the world’s schools, they were the third biggest category of investors, they produced more weekly magazines and newspapers than “all the secular press” in the European Union, he added.

“Your potential impact is enormous. You are the leaders who can have the longest, widest and deepest reach.”

His address was a sober moment in the day’s events, which started with a procession of conference delegates through the suburban town. Their robes sweeping the puddles, Buddhists, bishops, imams, monks, priests and rabbis ascended the hill to the castle.

Once inside the panelled room they heard each other’s plans to tackle climate change in their communities. In China, Buddhists would promote vegetarianismand a more abstemious approach to burning sticks of incense. From India there came pledges to use solar power in Sikh gurdwaras and to conduct energy audits.

The UN assistant secretary-general Olav Kjorven said the timing of the Windsor gathering could not have been more fortuitous.

Negotiators were meeting in Barcelona this week ahead of next month’sCopenhagen Climate Change Conference next month and they would, he said, continue “the age-old rite” of climate change negotiations in which each participant would to try to secure the best deal for their country, and leave the others with as much of the bill as possible.

“You have come to Windsor with the opposite mentality – that there is an abundance of possibilities.”

The three-day summit, organised by the Alliance of Religions and Conservation, finishes tomorrow.

Fachruddin Mangunjaya, from Conservation International Indonesia, said he was encouraged by the secretary-general’s words. “It is very important for us. We have real recognition and support from the United Nations. Around 85% of the world believes in something and it’s about how you change hearts and minds. One way to do that is religion.”

“We have many environmental problems in Indonesia – we suffer from flooding, tidal waves. We have 1,000 islands and we are fragile. Lots of our people live in coastal areas, by the beach. We should move quickly and act now.”