May 6, 2019. It was 1991. Fachruddin Mangunjaya was in his early 20s and had recently started his first conservation job with WWF-Indonesia in Jakarta. He was looking through a filing cabinet for some background papers when the label on one of the folders caught his eye. It said “RELIGIONS AND CONSERVATION.” 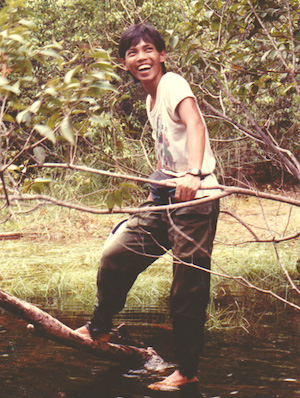 He was curious: he had never thought the two things were connected enough to have a folder for them. When he opened the folder there was just one document inside. That document would change his life. It would also save the lives of many endangered animals.

The document was The Assisi Declarations, initiated by HRH the Duke of Edinburgh, WWF-International and the team that became The Alliance of Religions and Conservation (ARC), led by Martin Palmer.

It contained messages on the links between humanity and nature from Buddhism, Christianity, Hinduism, Islam and Judaism. And when it was compiled for WWF’s 25th Anniversary celebrations in Assisi, Italy in September 1986 there was nothing like it anywhere in the world.

Mangunjaya is a Muslim and the son of a Muslim cleric. So he turned naturally to the Muslim section, written by Dr Abdullah Omar Nasseef, Secretary General of the Muslim World League.

The document began with the words: “The essence of Islamic teaching is that the entire universe is Allah’s creation. Allah makes the waters flow upon the earth, upholds the heavens, makes the rain fall and keeps the boundaries between day and night.” And as he read he was brought back through the years, to something that happened when he was a child.

When he was a small boy growing up in a remote part of Kalimantan he went with his friends for a swim in the local river, surrounded by tropical rainforest. There was a turtle’s egg on the beach. He brought it to show his father. “Can we eat it?” he asked in excitement. “No”, said his father. And he explained how Muslims should not consume “animals that have two natures, one of the land and one of the water.”

The teaching was from what is called The Yellow Book, Sabilal Muhtadin (“the way for people who are guided to explore religious matters”), an eighteenth century text that has become a reference for many Muslims in Southeast Asia. It was written by Sheikh Muhammad Arsyad al-Banjari, a scholar from southern Kalimantan who lived from 1122-1227 hijriyah (1710-1812).

The book names many animals as haram, or forbidden to eat, including animals with claws and sharp nails like eagles and cats, as well as turtles, frogs, crocodiles, and primates including the orang-utans and proboscis monkeys. It has become vital for contemporary Muslim conservationists working to protect all of those animals and others.

As a teenager he worked in a national park about seven hours from his home. He did it to improve his English by talking with foreign volunteers but he ended up being fascinated by conservation.

“Everyone does orangutans” his supervisor had told him when he started university. “What’s your second choice?” Leeches, he said. And before he was 20 he was an honorary member of the British Association of Leech Scientists. With a PhD in Environmental Management and National Resources he found himself in WWF, thinking for the first time about the links between two sides of his life – Islam and protecting animals.

He went on to support many key Islamic environmental programmes in Indonesia. To put it in context, Indonesia is the world’s most populated Muslim-majority country. It has 217 million Muslims, 83% of the population. Its endangered wild animals includes Sumatran tigers, Javan leopards, orangutans, anoas (small wild buffaloes), Indian tapirs, Sumatran rhinoceros and elephants, and sun bears.

All have benefitted from the bans, or fatwas, against killing threatened and endangered wild animals and protecting their habitat that Dr Mangunjaya has, with ARC’s support, helped Muslim clerics introduce.

WWF had a role in all these programmes. In its hosting of the 1986 event, in its guiding (through providing active and interested trustees and giving some funding), of ARC’s work in Indonesia and elsewhere, and in whoever did the filing, long ago in the Jakarta office – we have on the occasion of WWF’s 60th anniversary prepared a chronology of the development of the work on Islam and the environment in Indonesia. Work that is inspiring others, in Malaysia and elsewhere, to create similar programmes.